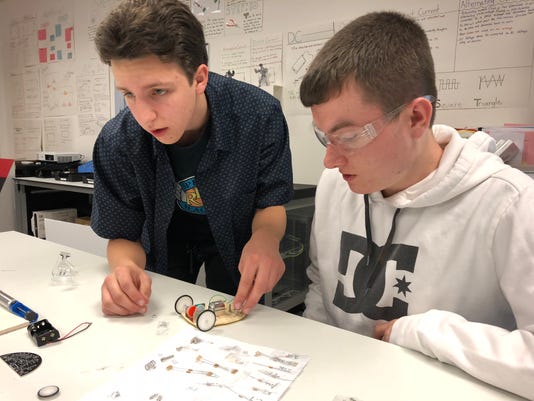 New Jersey’s job market remained relatively stable in November, the state Department of Labor and Workforce Development said Thursday in a sign that employers still need to be creative to fill positions.

As the state’s jobless rate fell to its lowest level since 2001, employers have begun working with vocational schools to create apprenticeships, even in industries that not long ago were thought to have a bleak outlook. “I was hoping to get a job out of this, which is what I’m doing now,” said Jordan Varcadipane, 17, a student in Monmouth County Vocational School’s advanced manufacturing program who works two days a week at Shore Printed Circuits in Eatontown.

New Jersey is getting a jolt from professional services and transportation, which long have been a backbone of the Garden State’s economy. But now it is also getting help from the manufacturing sector, which has added 10,500 jobs during the past year.
To help ease the labor crunch, the Murphy administration is touting apprenticeships in which businesses partner with schools to help students learn on the job.
The Monmouth County Vocational School District could be a model. The school last year partnered with Festo Didactic, a technical education business in Eatontown, to create an advanced manufacturing class.

It isn’t a traditional blue-collar job. One afternoon last week, about 14 students were completing a lesson on electricity and electronics. They studied instruction manuals and carefully pieced together miniature cars that, once complete, would be able to move by sound.

As part of the program, students can work two days a week at local manufacturers. By the time they graduate, they should have options: community college, a four-year college, or even jump straight into the work force.

“They definitely need hands-on skills, but with that they also need to be critical thinkers, be able to solve problems,” said Stefany Gurgel, who teaches advanced manufacturing and robotics. “I think a lot of times students get frustrated when they encounter problems. And the beauty of this field is, that needs to fascinate you. A problem is good because we want to solve problems.”

Some observers caution that apprenticeships won’t come easily for employers. Lawmakers in the Senate and Assembly recently passed a bill that would require construction companies bidding on public projects to have an apprenticeship program. It hasn’t been signed by the governor.

It would require more than 90 percent of public contractors to sign up for apprenticeship programs — and all of the paperwork, record-keeping and oversight that comes with it, said Russell McEwan, an attorney with Littler Mendelson in Newark.

“Companies are getting into the fray, but it’s not an easy task,” McEwan said.

“This becomes a pipeline to the building trades,” McGreevey said after the meeting.